How secure is your wireless network? 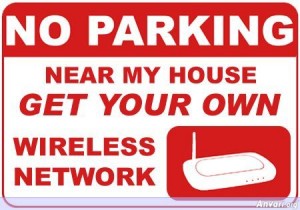 What is not so well known is that Hackers are finding more and more ways to identify and hack into wireless networks. Once they gain access to a network, they not only use and exploit your internet connection; they also gain closer access to servers and computers within the network.

The risks that are associated with wireless technology have increased as the service has become more popular, nowadays most homes and businesses have a wireless network. This creates a multitude of targets for a hacker, as the amount of networks increase… so does the threat!

In recent years the targeting of wireless networks has shot up, hackers can download simple free tools from the internet , these tools require no more than a few clicks of the mouse to break into a badly pass worded wireless network.

1. Use a strong form of wireless encryption, such as WPA2 ( Don’t use WEP or WPA as these can be broken into very quickly if the hacker knows what they are doing )

2. Disable SSID broadcast ( This hides your wireless network, making it harder for hackers to identify )

3. Create a whitelist of allowed MAC addresses on the router ( This will ensure only the IP addresses of computers and devices are allowed access to the wireless network )

4. Use a strong encrypted password for wireless access and change it periodically ( Ensure you make the password a mixture or alpha/numeric and a minimum of 8 characters )

These steps will help to protect a wireless network, but as technology is constantly changing, hackers are always looking for security vulnerabilities to exploit.

We will be blogging about new secure methods of network protection once we have installed and tested them fully.